Charlie Ray Wilson, Rest In Peace.  Charlie Wilson was laid to rest last week.  He was our client and our friend. 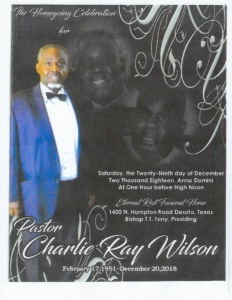 Charlie Wilson:  husband, father, friend, Pastor, citizen. Charlie was a believer. He had faith. Not just in the Almighty that he worshiped, but in our society’s institutions, principles and values. He believed in right vs wrong and had faith that what is right would ultimately prevail.

Thus, began his fight for justice when Parkland Hospital left a broken catheter in his wife’s heart during surgery, sewed her back up, and concealed that fact from them for seven years. Only when Parkland refused to take responsibility and be accountable did he and Debra file suit. Charlie’s faith in our legal system and belief that justice would prevail explains his willingness to carry on even after Parkland hired multiple law firms to erect legal barrier after barrier, raising technicality after technicality to the Wilsons’ case, and even after his beloved Debra passed away in the midst of the legal fight.

Parkland claimed the Wilsons suit was barred because they didn’t notify Parkland of their claim within six months of when the catheter was broken and left in her body unbeknownst to her. Charlie shook his head at the absurdity and pressed on.

Parkland claimed that Debra didn’t have a federal right to disclosure of its negligent act and then made a federal case out of the Wilsons’ case anyway. Charlie shrugged and soldiered on.

Parkland claimed that its legal liability is limited to $100,000, but then spent more than that defending the indefensible. Charlie was confused, but not deterred.

Parkland appealed the trial court’s refusal to dismiss the case. Charlie lamented the further delay, but didn’t give up. Yet his body did. No justice, but eternal peace.

Now, when the mourning is done, the Wilson children will pick up the mantel and continue the legal fight. After all, their parents had faith in our system. They believed that justice would ultimately prevail. Faith is a powerful motivator.

Rest in peace, Charlie. You were a good citizen. You fought the good fight. We share your faith…

The Notorious R B G – We will miss you!