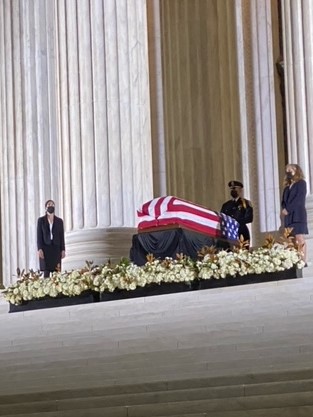 Post written br Allison Van Stean
Kizzia Johnson PLLC is deeply saddened about the passing of Supreme Court Justice Ruth Bader Ginsburg, who was a champion of advocacy for gender equality. In memoriam, one of our Associate Attorneys, Allie Van Stean, describes the impact that Justice Ginsburg had on her life.
***
“I would like to be remembered as someone who used whatever talent she had to do her work to the very best of her ability.” – Justice Ruth Bader Ginsburg.

In 2008, John McCain and Barrack Obama were facing off in a Presidential election. I was fifteen years old, and surrounded by high school teachers telling me how historical and important that election was. Presumably like most teenage girls, I also found myself enveloped in a world where most people – especially adolescent boys – hated nearly everything I loved and relentlessly teased me about it. From Taylor Swift to UGG boots, I felt constantly judged for everything I enjoyed. Even when I attempted to express my fondness for football, I was painted as a liar simply trying to get a boyfriend; which in turn led me to obsessively learn more and more about football in effort to “prove” my interest. None of the boys had to do that when they said they liked football. Never will I forget how it felt to be a teenage girl.

But that year, like a light switch, something inside of me flipped on: I suddenly became deeply interested in politics. To this day, I believe that the perfect storm of the historical 2008 election and my becoming painfully aware of just how insensitively our society can treat girls and young women was the catalyst for the flipped switch. Whatever it was, I never looked back. Just as compulsively as I had researched football statistics, I found myself using my tiny pink laptop to learn everything I could about political issues that caught my eye. Almost always, my Google searches were highlighted by numerous articles

that centered on topics about the politicization of gender. Justice Ruth Bader Ginsburg, who is often known as RBG and who was confirmed to the Supreme Court the same year that I was born, was a staple of those articles. I memorized her quotes; I discussed her work with anyone that would listen.

History books will teach that Justice Ginsburg was the second female Justice of the United States Supreme Court (which is 231-years old as of the writing of this post), and the longest ever Jewish Justice to serve on the Supreme Court. There will likely be classroom discussions about how she co-founded the Women’s Rights Project within the American Civil Liberties Union. It is certainly conceivable that conversations will be had about how the then-dean of Harvard Law School once asked a young Ruth to explain why she was occupying the place of a man, before she went on to graduate tied for first in her class from Columbia Law School. Perhaps students will learn that RBG is the primary reason why male spouses are now automatically considered dependents of their female military member spouses under Frontiero v. Richardson, or that she was the leading mastermind behind the Lily Ledbetter legislation regarding a woman’s right to equal pay for equal work.

It is true that these accomplishments could never be emphasized enough; women across our nation, regardless of political affiliation, have RBG to thank for a plethora of rights that can now be easily taken for granted. She advocated thoughtfully and methodically, always keeping in mind that long-lasting change cannot be done through a sprint but through a long, painful marathon that cannot be easily erased. No doubt as honored as Justice Ginsburg would be to have scores of achievements attributed to her in textbooks, she also understood t

hat social justice could not, and could never be, ascribed to a singular person; that nobody accomplishes anything great alone. That understanding led RBG to quietly and competently lead others down the path of advocacy for gender equality.

Similar to many others, I am sure, I followed Justice Ginsburg’s fight for equality. When I was a junior in high school and I proclaimed my feminism, I was branded a “feminazi” – by grown male teachers, no less. Taking cues from RBG, I was relentless in my advocacy and not afraid of a few, rude insults. When it was time for me to get married, I knew I had met the right person by taking the sage wisdom of Ruth, whose lifelong marriage to Marty Ginsburg is a beautiful love story that she has always credited to the fact that Marty cared that she had a brain and treated her as an equal. When I was unsure of what I really wanted to do after college, I pursued law school, following Justice Ginsburg’s mindset that a true professional does something to make life a little better for people less fortunate.

It never fails to astonish me how many young people RBG inspired. Saturday Night Live has segments dedicated to her courage and boldness. A “Pop Doll” action figure of her sits on my home-office desk. My phone case bears her photo. That an 87-year old woman was able to transcend generations of women is incredible. That, I believe, is her true lasting legacy. Women will become

advocates, lawyers, social workers, and professors because Ruth Bader Ginsburg inspired them to do something for someone else. Rash and overly bitter legislation will one day be bettered by those who look to Justice Ginsburg’s words of advice, all of which decree that calm rationality is the only way to institute change. I have yet to meet a single female attorney who does not hold a deeply-rooted affection for Justice Ginsburg; not to say that she does not exist, but only rarely. The most important female mentors and legal colleagues in my life have frequently used RBG quotes to teach others, to inspire themselves, or to ponder strategical legal decisions.

That RBG’s death gravely affects women like me goes beyond the current political landscape. She was the woman I looked to when I was a lost teenage girl, discovering my voice for the very first time. She was the idol who I thought of when I graduated law school. She is the conscience in my mind when I decide to advocate, and she is the teacher showing me how to do so effectively. Upon learning the news on

Friday evening, I was inconsolable even though I, sadly, never had the opportunity to meet the wonderful woman. A world without Justice Ginsburg seemed daunting and less complete, like a black pit of despair had sucked us all in. I texted KJ’s senior/managing partner, Brad Kizzia, and asked him if the sun would still rise.

Every election since I started paying attention in 2008, I have heard how historical the next election is. For a while, I wondered if that could truly be the case. Now, I believe that it is because people like Justice Ginsburg snowball change, and a snowball moves faster the bigger it grows. Each election becomes more historical than the last because of the implications at stake when looking to social justice; no matter on which side of the aisle you may sit. As obvious as it may be now, it turns out that the sun did rise on September 19, 2020. My grief – as I’m sure many o 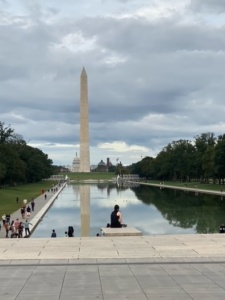 er’s as well – turned into fire. Because Ruth Bader Ginsburg trained all of the activists who walked on her path for this very moment: our turn to pick up the fight, to advocate more, to be braver, to work harder. And so, I would dishonor the Honorable Justice Ginsburg if I failed to implore you to make sure you are registered to vote; and then go vote.

May Ruth Bader Ginsburg rest in peace, may her impact be enduring, and may her fight for equality be continued to its conclusion. 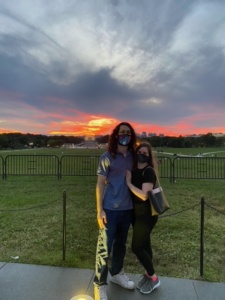 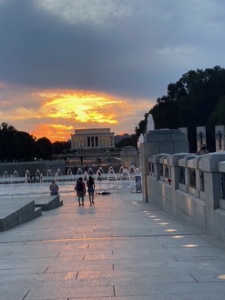 And the Fight Goes On